The city has a well-organised public transport system with an extensive tram and bus network. You can get anywhere in and around Ghent by tram or bus from early in the morning to late at night.

Getting to the conference site

The conference is hosted at The Faculty of Psychology and Educational Sciences located at Henri Dunantlaan 2, 9000 Ghent, a little bit outside the historical city centre. It is, however, easily accessible by public transport. We will welcome you at the main enterance of the faculty building.

By tram to the faculty:
– Tram 2 to the Rozemarijnbrug stop
– Tram 4, 21 or 22 to the Bernard Spelaan stop.
The walk to the Henri Dunantlaan 2 takes 8 minutes from both of these stops. 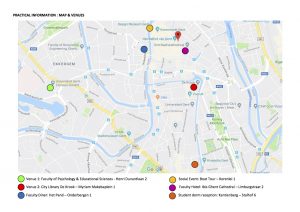 By air
Ghent is close to three international airports. From each airport there are bus and train services to Ghent. Most regular airline services are offered via Brussels International Airport.

When arriving at Brussels Airport, just go to the lowest level (-1) since the railway station is below street level. You can buy your ticket to Ghent («Gent») at the desk.

Spend your spare time in Ghent right with the IRW Ghent Tourist Guide! Here you find information about:

– the city’s architecture, monuments and cultural heritage
– museums that are worth a visit
– where to eat and drink – with a special section on where to go for Belgian beers
– parks to run or chill in
– music and theatre
– where to party 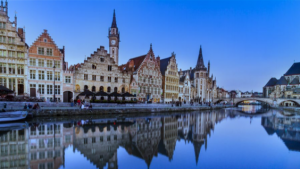 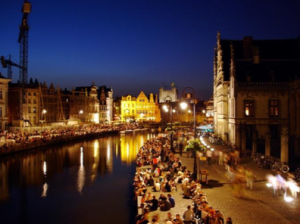 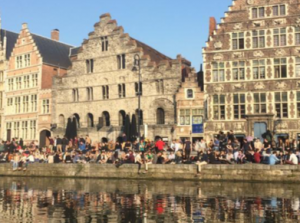 The city of Ghent

According to Lonely Planet, Ghent is «Belgium’s best kept secret». The city is located in the Flemish part of Belgium. With its 250 000 inhabitants it is the capital and largest city of East Flanders.

The city nearly equals Bruges when it comes to the number of museums, canals and bars. It offers a larger variety when it comes to contemporary art, theatres, and concert halls. Much of the city’s medieval architecture remains intact and is remarkably well preserved and restored. Its centre is also the largest carfree area in Belgium.

Attending the IRW – and thus visiting Ghent – you should see the medieval Gravensteen Castle, the belfry, the cathedral with the famous painting of the brothers Van Eyck «The adoration of the Holy Land», the St. Nicolas Church, the three beguinages and the monasteries.

There are plenty of well established hotels in the heart of Ghent near the University. The University itself is dispersed throughout Ghent, Belgium with buildings near its historic center as well as its modern outskirts. Feel free to reach out and ask the committee questions regarding the university or about the city itself.

For those who might be interested in extending their stay – the following link provides more information: https://visit.gent.be/en/HOME

Ghent University is one of the major Universities in Belgium, consisting of 41 000 students and 9000 staff members.

Over the years, eminent scientists such as Joseph Plateau (physicist, considered as a pioneer in the development of motion pictures), Leo Baekeland (inventor of Bakelite), and Corneel Heymans (Nobel Prize winner in Medicine) studied and worked at Ghent University.

Ghent University offers high-quality, research-based education in all academic disciplines. Today, Ghent University attracts over 28,000 students, with a foreign student population of over 1,100 EU citizens and some 1000 students from non-EU countries.

Located in Flanders, the Dutch-speaking part of Belgium and the cultural and economical heart of Europe, Ghent University is an active partner in national and international educational, scientific and industrial cooperation. It consistently rates among the top universities not only in Belgium but also throughout the world.